Ah !!! I 've bade adieu
to winter
No not with a heavy heart!!
I am so happy
to see those heavy woollens
and gaudy colours
finally depart.

Its never too late

A topic after my heart ---I have the unruliest hair any woman can have and I have tried every gimmick to keep it under control but alas !!! No one can understand the  agony of unmanageble hair and the resultant tragedies


They range from kindergarten days to your wedding silver jubilee and beyond ---I say this because I have experienced it .


In K.G. you have other kids touching your hair out of curiosity and then ending up pulling at it and tearing it making you hate school and giving your parents nightmares as to how to continue sending you to school. 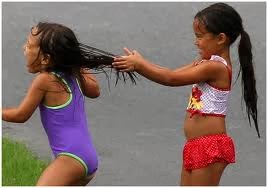 .Though there was one plus point resulting from this agony I used to get the bribe of one  chocolate every morning .Just  as I would start crying and refusing to get down from the car my mom  would push one chocolate into  my mouth and drive away before I could start my tantrums .

Then came school and adolosence --a nightmare for nearly all girls ---wanting to be recognized by and yet scared to be associated with ,boys  , I was no exception ,with the added agony of  my unruly hair which would scare away even the bravest of boys. 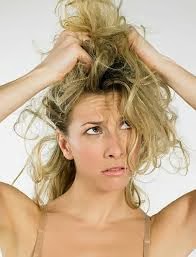 Oh !! you wouldn't understand until you have gone through it yourself !!!

College, though, was not all that agonizing. With no set rules about uniforms and hair dressing as in school , I was free to make a style which would suit me , so I used to hide my tresses under the most beautiful head gear, scarves and flowers etc like the following 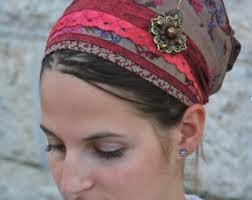 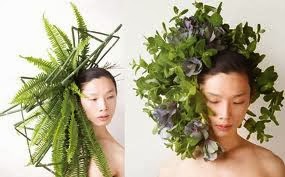 glamorous aren't they ?( but till date I have not been able to fathom the reason why none of the boys  felt attracted !!! sigh!!!Or may be because I had a more handsome guy waiting for me ( hubby ) .Now you would wonder how come he fell for me ?!.Well simple, Thanks  to the Indian system of arranged marriages and the system of covering your head  when the prospective in-laws came to "SEE" (inspect) you . So I had my head covered with a dupatta and  my in-laws were so happy to find such a docile and cultured girl !! 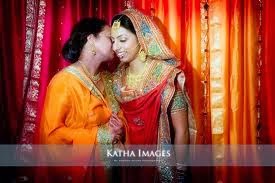 .Another reason why my hubby did not complain was that he himself was fully aware of his receding hairline fast leading to baldness.

All this was disclosed to me after marriage .

Later on, though more than happily married we always had tiffs when it came to my unmanageable hair ---be it a romantic night or a picnic or a party  my hair always was the center of 'attention' snatching away my moments of glory .

My kids too were not always very proud of my hair styles but being my offsprings they learnt how to cope with and even boast of, their darling mother's hair .So much so that none of their friends dared criticize me and my crowning glory.

Now came the grandson who dotes on me But this is how he told his mother about one of his friends " Ma I am talking about the boy who has hair like Nani's" my daughter smiled ,I grimaced and my hubby enjoyed. And my granddaughter!! she  is so sweet and straight forward she always tells me to cover my head with my 'sari pallu' whenever I go out with her .

So all these agonizing moments  want me to do something for my hair and I would like to try some of these 'Sunsilk' products ---What ? if I  am no longer young? but then like they say one is as young as one feels and age is no hurdle if you want to enjoy life .As it is I colour my hair which reduces my age by  at least ten years but all the pallu covering pulls my efforts back by another ten years so I am left at square one ---but now that this SUNSILK product will give my hair a new lease of life I will do all that which I had only wanted to but was unable to because of my hair.I will ride pillion with my hubby on his favourite motorbike ,which we had to abandon and buy a car ,only because I would start looking like a wild cat as soon as the bike took speed and all my mates romantic intentions would stay put. 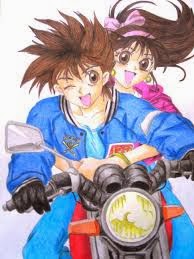 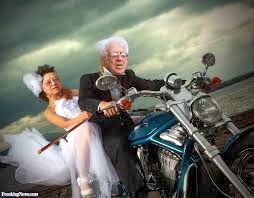 isn't that reason enough to get my hair recharged ? !!!!---to be able to live those moments of  our life which were lost due to a thing as trivial as my hair --if  these Sunsilk products would have been available in those days life would have been so much more sweet and romantic ---because unlike these days where romance is depicted by breakdance and loongi dance --- our days used to be full of songs and ideas which revolved round the heroine's eyes and hair. Romance would flourish under the lustrous curls of the girlfriend or the wife and every female used to dream of her "reshmi zulfein "(silken hair) the men would sing songs like --

and here was this couple (my hubby and I ) missing out on all  that ---culprit MY Crowning Glory because though my eyes were and are a real beauty but the zulfein !!! leave much to be desired " -- .

Again like they say 'its never too late' so Thank you Sunsilk for introducing this product I am waiting eagerly to try it ---recharge my hair --and start life all over again . So that if and when I will lie in my hubby's arms  breathing my last he will be singing ....

(a la hindi film style, my 'Bible' for romance )

this is my entry for the recharge your hair contest organized by Sunsilk and indiblogger and the link is http://www.sunsilk.in/


all the pictures are from the net .