With Bunty and Bubly on the run to avoid police and family they both came across  a lot of idiosyncracies of the people of --MERA BHARAT MAHAN .

Tired and Hagard they had just put foot inside a  restaurant for a cup of tea  when they heard the police siren and  immediatly  took a 360 degrees turnaround Bunty pushed Bubly behind the compound wall of the restaurant and said,

" Don't even Breathe they may hear us "

"How was your trip to Singapur P. Sahab did you enjoy ? How was the place ?"

and ....phichch a shower of  paan stained sputum came flying from his lips to land on Bunty's shirt sleeve

"Han haan maine bhi suna hai They levy a fine if you are caught spitting " aargh kh kh and he cleared his throat  letting a lot of phlegm  land just in front of Bunty then he  wiped his lips on the back of his shirt sleeve  .

The guard clicked his heels and saluted them both before opening the door for them to go in .

"Phew  that was narrow ....and you really did a good job you must have really held your breath because I saw The police men walking from very near your hide out "  and Bunty patted Bubly's back

"Itna tareef karne ki koyee jarorat nahi ... the stench of urine from those walls was so terrible that my breath held itself . ......."you men  can't you wait to go to the toilet jaha chance mila bas you relieve yourself --chhi ---by the way where did you hide? and you can remove that hand from my back ?"

"hmm..".and Bunty decided not to disclose his experiences for fear of more rebuke by Bubly

"Come come run lest we are caught " he said dragging her .

"Whats it ? "Bunty was furious

"Yuk poor you"  this as he saw her feet nicely covered with human excreta that of a child's Babli refused to walk until her feet were cleaned ,she just threw away her shoes , Bunty said what if the police dogs will smell her from the shoes but then he just laughed, not to worry all that shit will nicely cover up her smell for the dogs to catch her .

Just then they saw a couple walk out of the club and the man blew his nose throwing the scum on the road and wiping his fingers on the gate post.

"Darling don't do that don't you have some civic sense" said his partner as she threw her chocolate wrapper on the ground ..

They gave the gate keeper a five hundred rupee note as they drove away in their shining black chauffeur driven car but not before the lady grumbled about the kids littering in the car and admonishing the driver for not cleaning the litter.
"These schools they just don't teach the children any good habits I will have to complain to the principal"  and  she threw away a soft drink can from inside the car..

Both Bunty and Bubly  smiled sarcastically and embarked on their run . They could here the police men swearing using the choicest two letter, three letter and four letter words .

But they both picked up the 'wrapper' and the 'can' and thought that  they would throw it into some dustbin when suddenly they saw a garbage dump and proceeded to throw the stuff there But lo and behold it was not a garbage dump it was a park where the people had , had a picnic and had walked away leaving all the trash . 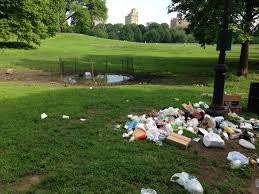 Sad at the state of affairs both of them continued their run because not only the police but also their parents were on their hunt and the police was not half as scary as the respective set of parents .

They decided to take a turn from the normal busy route and to go and hide some where on the banks of the Ganga amidst the  pristine surroundings BUT what a sight greeted them on the banks of the most pious river the revered mother Ganges the place of pilgrimage with so many temples around. 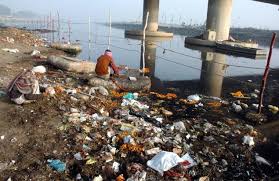 if this is the plight of  holy places then help  me Lord Both of them were so disgusted that they decided to go back to the village they belonged to and work at making people change their habits .

http://greatindian.timesofindia.com/.
-
all pictures are from the net (google)
Posted by Rajni Sinha at 04:20