My mother --the expert sculptor

"My first expert '  that is such a sweet way to define a mother,  for she actually is every person's first expert . She is the one who teaches a child everything about life. She is a doctor , a cook, a teacher , a friend , all rolled into one and she is an expert in all these fields and always the first to guide you.

A mother is actually the first expert in everyone's life and so was mine .

Everyone loves their mother and feels that their's is the best but my mother holds a special place in my life because she was everything mentioned above and much more .She was my Mentor  .

She put my life  on a pedestal ---yes that is it ,on a pedestal ---I am not trying to say that I was better than the rest  or superior to others but the way my life had gone into shambles even becoming a normal child was like being standing on a pedestal , and having put me on a pedestal she went about her mission of  making me worthy of staying on that pedestal.


My childhood was spent away from my parents because my father was in a continuously transferable job and his postings used to be in remote areas where though we were provided  all other comforts of life by the company but good schools were not available .I was sent to stay with my grandparents and there's was a joint family , so though otherwise very loving and caring a feeling of competition and jealousy did arise  between the various uncles and aunts and their children ---and since my other cousins had there respective sets of parents they were emotionally more secure than me .I sort of had no one to rush to for emotional support if I committed a mistake or if I failed to reach a certain grade in studies or extra curricular activities in school.All this made me a nervous wreck and I cultivated a terrible inferiority complex underestimating myself.

When my parents noticed this they decided that It was time I was brought back home . They decided to have double establishment and my mother shifted to the city with all us brothers and sisters  . She would shuttle between my father's official residence and our house in the city.
She devoted all her time in making me strong and self sufficient . She gave me the mantra that "nothing succeeds like success " and that society has a very short memory People don't have the time to think about you so never restrain your activities for fear of social criticism eg when I was selected to give my voice to hindi plays on All India Radio I was a bit apprehensive as society in those days was a bit conservative but she encouraged me she asked me to go ahead and she told all her friends about my achievement .

She gave me a book called "They Dared To Be Doctor's '  its the story of two lady doctors of the 19th century Dr Elizabeth Blackwell and Dr Elizabeth Garrett Anderson  who dared to become medical practitioner's during the conservative Victorian age . She also told me the story of Rani Lakshmibai ( the queen of Jhansi ) who defied the male dominated times and fought the British She was one of the pioneers to start the first war of Independence in 1857. Mom always told me that had these women thought about social reaction they would never have achieved what they did ---and then she would tell me "  do you see who praises them ? the men folk don't they ? so don't worry about what other 's will say as far as you are not doing anything wrong go ahead and achieve"  .

She was the youngest of two brothers and two sisters  and since both her brothers were in hostels pursuing their academics and the sister was married she was a lonely child who used to follow the nomadic lifestyle of her parents .But instead of becoming a "lonely "child she moulded herself into an "only" child  full of talents and expertise in as many fields as possible    Her father being in the railways would continuously get transferred and she would land up making friends with the local people as well as the families of the Anglo Indian staff . As a result, in that small span  of 18 years ( she got married at the age of 18) she had become an expert in the cuisine of all the local places she had stayed in .She was fluent in Bengali, Oriya, and chhatisgarhi  and she was an expert in knitting, crochet and baking and cooking courtsy the mother's of her  Anglo  Indian friends .All the ladies doted on her and were more than willing to teach her because she was a very bright student whereas their own daughters were not at all interested in anything . In fact though a school drop out ( because in those days not much importance was given to girls education her parents just let her do her matriculation as a  private candidate)  She picked up the English language from the Anglo Indians. Impressed by her intelligence my grandfather  allowed her to buy the famous magazines ("Women and Home " and the "Patons and Beehive" books on knitting and crocheting etc) he was very proud of her  .

She left those books and magazines as a legacy for me. I still have them , though they are  dated much before my birth .

After she got married to my father who was a Mine's manager in a British Firm she never had any problems getting along with the wive's of the British officers. In fact she was very popular among them and they admired her because they just couldn't imagine an Indian girl being so knowledgeable --she could bake and cook and was an expert in making even  continental dishes this  was very astonishing for the Britishers themselves . All this was in the early 1950's .

She was a God gifted person as far as talents were concerned She was not only fast in acquiring skills but she was the owner of a very sweet and melodious voice and a renowned singer in her social circle.

Thus I conclude with the sentiments that though she was the metaphorical " first Expert "  that every mother is .  She was literally an expert in real life too .

In addition to all those skills and achievements that she was an expert in , she was a skilled architect a sculptor who could chisel my life in such a way that she cut away all the unwanted edges in my existence smoothening   away  all sharp and harmful edges to make my personality  successful  and as near to perfection as possible .

After my father's early demise , too , she brought  up us three  brothers and sisters single  handedly  without any help from any one thus shouldering the responsibility of the good and the bad .

I end this write up with the words 'Maa tujhe salaam ".

I salute her not only as a mother but as a woman who knew how to live She never let  herself become  a victim of times when girls were not allowed to blossom, she did not let herself become the victim of prevalent backward society, instead she made use of all opportunities that came her way  and became a role model for us girls who were living in times full of opportunities and facilities.

Thus she not only sculptured my life she also sculptured her own life coming out a victor . 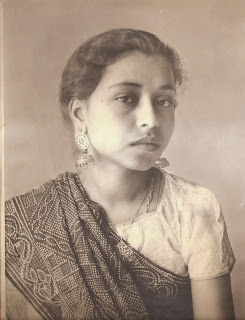 The mother to be 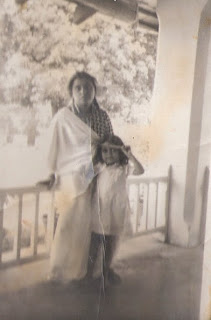